Alexey Miller: Gazprom to become one of major players in global helium market

St.Petersburg, September 24 - Neftegaz.RU. A presentation of a helium production and marketing project that forms part of Gazprom's Eastern Gas Program took place on September 23 at the Lakhta Center.

Gazprom is building the Amur Gas Processing Plant (GPP, the project is 66 % complete) in the east of Russia. Here, the multi-component gas extracted from the Chayandinskoye and, in the longer term, Kovyktinskoye fields and delivered via the Power of Siberia gas pipeline will undergo processing to produce valuable components, including helium in liquid form.

Helium is much in demand in high-tech industries. The demand for helium is growing, especially in the Asia-Pacific region. With a capacity of up to 60 million m3 per year, the Amur GPP will become a global leader in helium production.

Marketable helium will be delivered from the Amur GPP in containers preserving the temperature of –269 degrees Celsius to the Logistics Center for thermally-insulated containers near Vladivostok and subsequently exported via the ports of the Primorye Territory. The Logistics Center, which is being set up in the Nadezhdinskaya PDA, will become the world's largest hub for servicing thermally-insulated helium containers for supplying liquid helium to the global market. 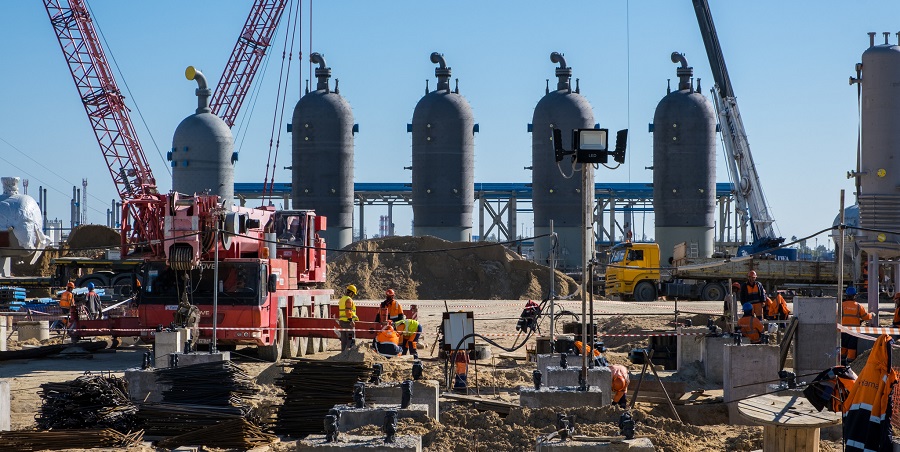 It is planned that the Logistics Center will have a capacity to perform upward of 4,500 process operations with containers per year. The facility's construction readiness is above 70 %.

A freight truck of this modification has 2 cryogenic fuel tanks for 530 liters of LNG each, which is a sufficient amount of fuel for the vehicle to cover a distance of up to 1,400 km without refueling. The freight trucks were manufactured in line with the requirements of the European Agreement concerning the International Carriage of Dangerous Goods by Road. Each truck is equipped with modern safety systems (ABS, VDCS), satellite navigation system, and the ITIS system designed for monitoring, recording and control of motor vehicles and drivers.

During the event, Lyubov Brish and Sergey Kogogin signed a contract for the delivery of 18 LNG-powered freight trucks by April 1, 2021. The vehicle fleet of Gazprom Helium Service will be provided with the required services at the truck manufacturer's service centers located in the Amur Region, Primorye Territory, and Khabarovsk Territory.

“After the Amur GPP reaches its full capacity, Gazprom will become a major player in the international helium market. The company will increase its helium production volumes by 13 times, which makes about a third of the current global demand. Importantly, Gazprom will reach this result in close interaction with Russian industrial enterprises. Cooperation with KAMAZ is a vivid example of this,” said Alexey Miller.


The event also featured a presentation of buses powered by natural gas which are purchased by the city of St.Petersburg under a pilot project run jointly with Gazprom Gazomotornoye Toplivo with a view to developing the NGV market. The use of eco-friendly public transport makes urban environment more comfortable. The company is planning to increase the number of gas refueling stations in the city to 25 by 2024.

Companies
120
120
Shell dropped from its name the «Royal Dutch» part, which it had carried for 130 years

Companies
263
263
Another 4 licenses for Polish PGNiG in Norway
Advertising at neftegaz.ru