St.Petersburg, May 29 - Neftegaz.RU. The Gazprom Management Committee took note of the information about the status of the Amur Gas Processing Plant (GPP) construction project. The GPP is one of the largest infrastructure projects of the company in Russia's Far East.

The plant will process multi-component natural gas received via the Power of Siberia gas pipeline from the Yakutia and Irkutsk gas production centers. Valuable components extracted in the course of processing will be used as feedstock for the petrochemical and other industries.

It was noted at the meeting that the progress of the project is currently at 61.9 %. At the 1st and 2nd production trains of the GPP, which are going to come onstream in 2021, installation of the core equipment is completed, process pipelines are being installed and provided with thermal insulation, and start-up and commissioning activities are underway.

Process pipelines are also being installed at the 3rd production train, while the installation of steel structures and foundations for large equipment is being finished at the 4rth train. At the 5th and 6th trains, foundations are being poured while piperacks and steel structures are being assembled. More than 28,000 workers and engineers are working at the construction site.

With the opening of the navigation season, large equipment can now be delivered by sea and river vessels. This year, 43 units of equipment weighing a total of 7,700 tons will be brought to the Amur GPP's wharf. 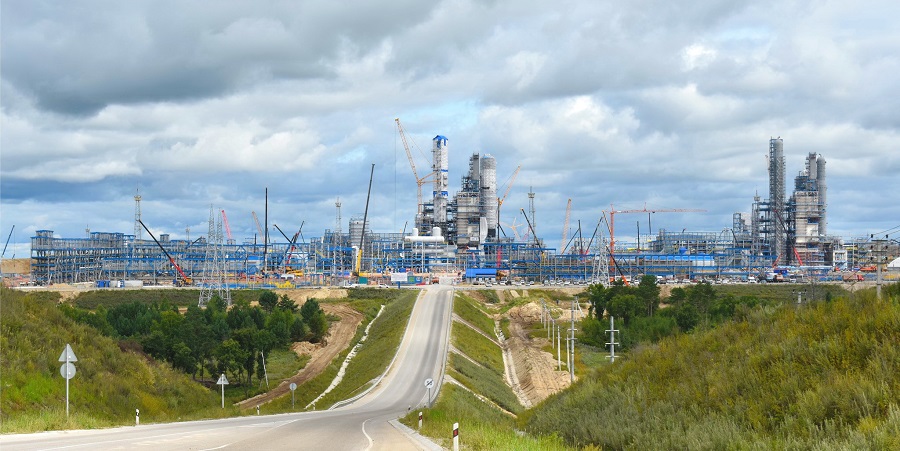 Construction of the Svobodny TPP, which has a capacity of 160 MW and will provide the GPP with heat and electricity, is ongoing: its main building is completed, the steam generators are in place, and work is underway on the steam turbines and auxiliary equipment.

The commercial product supply system of the Amur GPP will include the Helium Tank Logistics Center based near the city of Vladivostok. It will be the world's largest hub for the servicing of thermally-insulated helium containers, which will deliver liquid helium to the global market.

It is planned that the Logistics Center will have a capacity to perform upward of 4,500 process operations with containers per year. At present, construction of the hub's main production buildings is nearing completion, and preparations for the installation of core process equipment are in progress.

It was also noted that this past March marked the start of the drawdown of project financing funds that were successfully raised in late 2019 for the construction of the Amur GPP. In terms of the amount of project financing – EUR 11.4 billion – the deal was unprecedented in Gazprom's history and became one of the largest transactions of this kind in Europe's debt market over the last few years. The funds are being provided by 22 European, Asian and Russian banks.

Companies
236
236
Another 4 licenses for Polish PGNiG in Norway

Companies
270
270
NOVATEK: an independent appraisal of 2021 hydrocarbon reserves has been completed