In this paper, a more generalized concept of the "skin effect" is proposed. Numerous methods for studying the operation of wells have shown that the main goal of stimulating production wells (stimulation of production) is to increase the productivity of a well. Typically, stimulation is applied to conventional fracturing, acidizing carbonate or sandy reservoirs, and acidizing fractures (acid fracturing). Note that the decrease in the drawdown is not so obvious, but it makes it possible to minimize the production of sand and the formation of a water cone or a shift in phase equilibrium in the bottomhole formation zone, which reduces condensate loss. Field studies have shown that due to the radial nature of the flow, most of the pressure drop occurs near the well and at the bottom, and any damage in this area significantly increases pressure drop. The influence of damage to these zones can be represented using the skin factor [1 ÷ 5]. In real conditions, the deterioration of the bottomhole zone and bottomhole performance can be caused by the influence of poor-quality mud during drilling and well development, bottomhole flushing with water, clogging of formation pores and perforations, etc. In this paper, a more generalized concept of the "skin effect" is proposed.


Well can be considered imperfect and the formation permeability in the bottomhole zone will not reflect the actual value of this parameter in the formation. This effect was first observed by American scientists Miller, Dyes and Hutchinson [6]. As the authors note, change in the bottomhole formation zone affects the shape of the initial sections of the bottomhole pressure tracking graphs. In view of the above, Hurst and Van Everdingen [5] introduced the concept of "skin effect". However, these works do not take into account the impact of the well bottom itself on productivity.

The concept of "skin effect" we accept is one idealization that combines the most important aspects of damage to the bottomhole and bottomhole zone of the well. This creates additional resistance caused by damage to both the bottom hole and the bottom hole. Note that with the best drilling and well development practice, formation damage is observed in numerous cases. Considering the above, the "skin effect" can be considered as an indicator of the "quality of drilling" wells. Other mechanical and hydrodynamic factors, poor perforation, partial penetration of the formation, deposition of asphaltene, paraffin and resin in the bottomhole zone of the well, insufficient selection of downhole equipment, etc. can be added to the concept of "skin effect". Note that if the well is damaged, i.e. if the productivity for some reason is lower than the productivity of the ideal well, then the "skin effect" is positive.

In our concept, well stimulation is an increase in productivity; then there is a scientific and practical sense to consider stimulation as a method to reduce the value of the "skin effect". The paper proposes a new parameter "generalized skin effect" or "generalized skin factor", which, with the appearance of a negative value, gives a positive effect, i.e. increases productivity and productivity. In this case, such operations arise that not only eliminate negative factors, but also create new or partially improve the performance of the well and the formation. In foreign literature, this factor is referred to as the "pseudo-skin effect" [4]. This parameter shows that the concept of stimulation, along with the elimination of damage, creates some structural changes in the bottomhole zone of the well.

As known, the Darcy equation for a radial reservoir can be written:

where Q is the volumetric flow rate of an incompressible homogeneous fluid;
k is the average permeability of the formation;

h - is the thickness of the formation;

- is the dynamic viscosity of the incompressible fluid;

- is the pressure gradient.

Let's write this equation in the form

Applying the boundary conditions, we integrate this equation:

As you know, all formulas related to the volumetric flow rate of an incompressible fluid contain the coefficient of hydrodynamic imperfection, which is almost one of the most important parameters of the inflow to the well. This concept of the imperfection of a production well is unlikely to become unambiguous. Note that the meaning of a hydrodynamically perfect well can be considered that the well has completely penetrated the formation from top to bottom and in this case the bottomhole is completely open along the lateral surface, there is no perforation string or filtration mesh at the bottom. In this case, the inflow of an incompressible fluid occurs through the side surface of the bottomhole, without experiencing additional resistance. Practice shows that there is no perfect well from the point of view of hydrodynamics.
In reservoir fluid flow theory, wells are distinguished that are hydrodynamically imperfect in terms of the degree of reservoir penetration, and in the quality (nature) of the opening. However, in some cases, the well may be perfect in terms of the degree of formation penetration and imperfect in the quality of penetration, or vice versa. In view of the above, we introduce a new designation for "skin-perfection":

This parameter is dimensionless and shows the effect of well imperfection. Then we have:

Note that a hydrodynamically imperfect well can be replaced with a perfect well equivalent in production rate, the radius of which will be many times smaller. In this case, the radius of such a well will be fictitious, like this well. To determine the imperfection of the well, V.I. Shchurov developed a special calculation formula [4].

С - dimensionless coefficient, which is determined by the formula:

In technical literature, discussing the productivity of a well, a linear relationship between the flow rate and driving force (depression on the reservoir) is implied.

where the "constant" of proportionality is called productivity.
During the operation of wells, it repeatedly undergoes a change in the flow regime. For wells with a "skin effect" there is a dependence of this parameter on this effect, i.e.

This technique makes it possible to determine the pressure loss in individual sections. Solving this equation with respect to the pressure drop, we have: 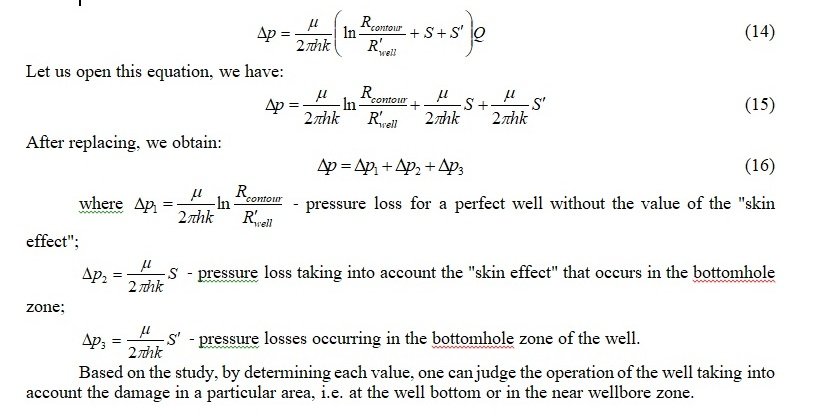 1) The analysis shows that not taking into account the "skin effect" leads to infraction of the filtration parameters, which in turn affects the permeability of production wells.

2) The "skin effect" manifests itself not only in the bottomhole formation zone, but also at the bottom of the well itself. During the determination of this parameter, it becomes possible to carry out additional work to improve the operation of this well.

4) To increase production, drawdowns are often increased to counteract the decline in production, which can lead to accelerated liquefaction (de-consolidation) at the level of the pore space and additional sand production.

4. Salavatov T.Sh. "Elements of operation of horizontal wells in the development of oil fields". Textbook in Azerbaijani, Baku, "Maarif", 2002, 92 pages.