Verona, October 23 - Neftegaz.RU. Rosneft CEO Igor Sechin has virtually addressed the speech “Returning to Growth” at the XIII Eurasian Economic Forum in Verona, Italy. The Forum’s main theme is the New Normal for the Global Economy from the Atlantic to the Pacific.

This year’s Forum has been attended by Romano Prodi, President of the Foundation for Worldwide Cooperation; Denis Manturov, Russian Minister of Industry and Trade; Stefano Patuanelli, Italian Minister for Economic Development; Andrey Kostin, President of the Russian VTB Bank; Emma Marcegaglia, President of ENI; Patrick Pouyanné, Total CEO; Antonio Fallico, Chairman of the Management Board of Banca Intesa Russia; Federico Sboarina, Mayor of Verona; Fabio Tamburini, and many other politicians and business persons.

Igor Sechin said that the global economy was going through unprecedented times of turbulence and uncertainty. This year would result in its decline, while the prospects for 2021 would remain dependent on the success of fighting the pandemic. “According to the existing estimates, the recovery of the global economy and oil demand can begin as early as next year. However, to achieve that, mankind needs to put in coordinated efforts. This is a challenge but it can be resolved,” he said.

“China's art of managing commercial and strategic oil reserves to ensure economic growth is to be highly praised,” Rosneft CEO believes. “China is building up stocks during periods of oil price declines, not only ensuring that its economy grows with more affordable energy resources, but also supporting the entire global oil market during periods of falling demand, as it did in April and May this year. ”

According to Sechin, the right thing to do would be to use that experience of China’s combating the virus pandemic and not to rebel against it. Should the attacks on certain countries depicted as couriers of the virus continue and should the borders keep closing instead of solving the problem, mankind would be unfortunately dealing with the pandemic for longer time still.

According to Sechin, long-term oil demand prospects will be determined by the technologies and the pace of energy transition, as well as the sharpening contradictions between economic growth and greenhouse gas emission reduction targets. These contradictions have the potential to be resolved, among other things through technological advances that will both improve the availability of renewable energy sources and significantly reduce the environmental impact of the use of conventional oil and gas.

“However, there are other serious issues, which cannot be resolved with technology,” the head of Rosneft said. Among them are the sanction pressure tools used by the US and the EU. “No justification is required today to impose sanctions; they can be introduced at almost any time against any company or even an individual. The sanctions are preventing and will prevent markets and the global economy from recovery. A vivid example is the pressure on the Nord Stream-2 project that was added to the US National Defense Authorization Act,” Sechin said. 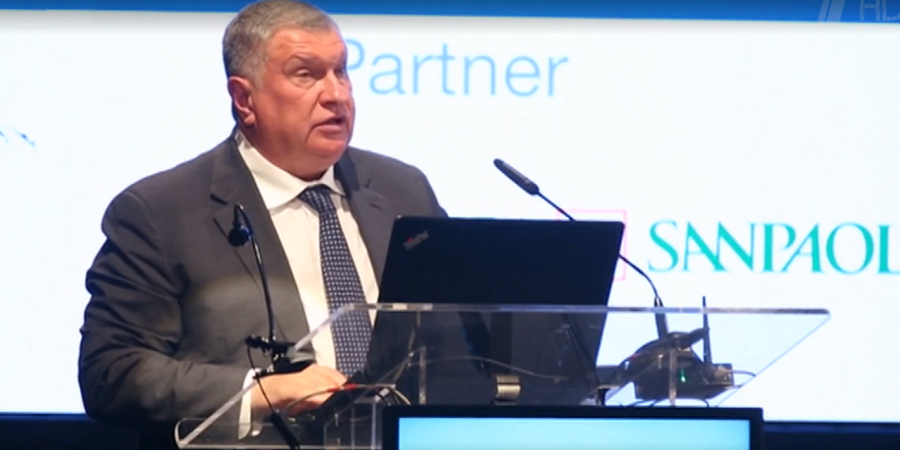 In his opinion, the natural desire of several countries to guarantee the stability of their own economies will lead to protectionism, regionalization of trade, nationalization of products. However, the isolation of economies and the construction of barriers are inapplicable in the energy sector and lead to devastating consequences for both producers and consumers of energy resources.

“Regardless of how behaviour patterns may change, the mankind will require more energy in the future, and the energy demand will grow along with the global economy and the population growth,” the head of Rosneft said.

In his opinion, renewable energy alone will not be able to meet the growing demand. For example, according to the IEA, achieving the net-zero emission target in the next 10 years will require at least $28 trillion in investment. And the theoretical scenario of the complete abandonment of fossil fuels use will require about $50 trillion of investments in the same period which is three times more than the EU GDP.

While taking into account sidestepping fossil fuels, we should also keep in mind the possible deficit of metals needed to produce equipment and, for example, the batteries to store the energy produced at solar and wind plants. Some types of metals are mined in countries with complicated jurisdiction or can be highly toxic, like cadmium. Many of the technologies actively promoted nowadays can hardly be implemented in all countries and environmental conditions, unlike traditional oil and gas. Given the current level of technologies, fewer countries can afford the active development of renewable energy due to economic reasons.

“The impact of these factors is well-illustrated with the current expansion of green energy. Now 80% of all electricity output produced by solar and wind plants in the world are located in 10 countries. The multiplicity of some metal reserves at the current level of consumption is more than enough but if the consumption grows exponentially, the deficit and dependence of unstable supply will occur,” Igor Sechin warned.

He also noted that the accelerated transition to renewable energy sources could lead to investment imbalance: lack of investments in oil and gas production will lead to a sharp increase in prices of all energy resources, not only oil and gas.

Rosneft makes every effort to secure a stable hydrocarbons supply in perspective. “And even now Rosneft has one of the lowest rates of greenhouse gas emissions in the oil and gas industry, and one of our strategic priorities is to retain leadership positions in this area. Over the last few years, we managed to prevent over 3.1 million tonnes of CO2-equivalent emissions. In 2019 alone, we planted more than 1 million trees in Russia. In the last five years, our green investments have exceeded $4 billion,” Igor Sechin said.


At the same time, the company’s achievements in sustainable development were reflected in the specialized international ratings, where Rosneft is ranked at the level of global majors. The company has continued to strengthen its position even during this challenging year. Sechin noted that recently LGIM, one of the world’s leading investment companies, which manages assets worth more than $1.5 trillion, increased the сompany’s valuation by remarkable 80%, assessing its climate change agenda.

Conferences & Exhibitions
897
897
German Foreign Minister Maas is happy that the U.S. is back on board in the area of climate policy