As part of the official visit by Gazprom's delegation to the Republic of Slovenia, Ljubljana hosted today working meetings among Alexey Miller, Chairman of the Company's Management Committee, Danilo Turk, President of Slovenia and Janez Jansa, Slovenian Prime Minister. 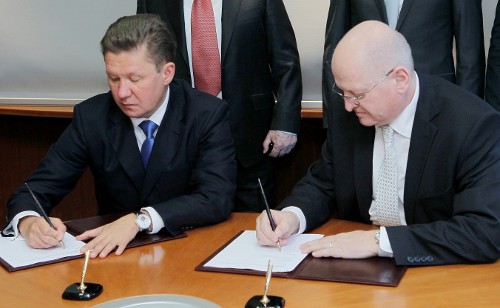 As part of the official visit by Gazprom's delegation to the Republic of Slovenia, Ljubljana hosted today working meetings among Alexey Miller, Chairman of the Company's Management Committee, Danilo Turk, President of Slovenia and Janez Jansa, Slovenian Prime Minister.

The parties addressed the current issues of cooperation between Russia and Slovenia in the energy sector. Special attention was paid to the South Stream project being implemented by Plinovodi on behalf of the Slovenian party.

Alexey Miller and Marjan Eberlinc, President of the Board of Plinovodi signed a Supplementary Agreement to the South Stream Slovenia LLC Shareholders Agreement. The document defines the layout and parameters of the gas pipeline's Slovenian section that were defined on the basis of the Consolidated Feasibility Study of the project.

In addition, the Supplementary Agreement provides for establishing the joint project company (JPC) South Stream Slovenia LLC within a month period. The JPC will be focused on spatial planning, environmental impact assessment and basic engineering works.

Based on the meeting results, the parties agreed to make the final investment decision on the South Stream project this November.

In 2011 Gazprom supplied Slovenia with 0.53 billion cubic meters of natural gas. The current contract is effective through to 2017.
With a view to diversify the natural gas export routes Gazprom is planning to construct a gas pipeline running under the Black Sea to the countries of Southern and Central Europe – the South Stream project.

The projected throughput of the South Stream offshore section will reach 63 billion cubic meters per year. Construction of South Stream will start in December 2012. First supplies via the gas pipeline are planned for the end of 2015.
Intergovernmental agreements were signed with Bulgaria, Serbia, Hungary, Greece, Slovenia, Croatia and Austria in order to implement the onshore gas pipeline section.