After methane, ethane is the main component of natural gas, and is also found in marsh gas 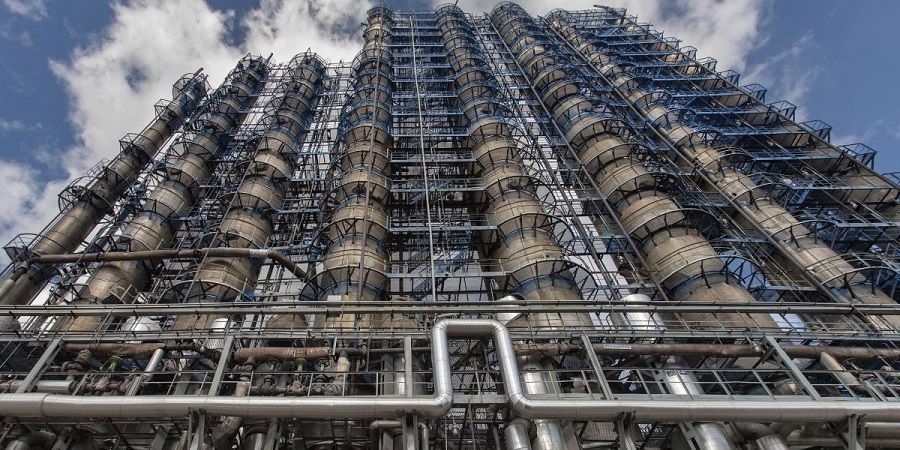 It is in the alkanes substance group with the molecular formula CnH2n+2 (saturated hydrocarbons), and occurs as a trace gas in the atmosphere, i.e. in very low concentrations.

Because of its molecular structure – which consists of 2 combined methyl groups – ethane is also sometimes called bimethyl or dimethyl.
In refrigeration and climate-control technology, ethane is also known as R170.

Because of its good combustibility, ethane is also used as a component of natural gas for heating (calorific value: 47.486 MJ/kg).
In the main, however, the saturated hydrocarbon is used as a chemical building block for the production of ethene, the world's most important petrochemical feedstock.

The conversion takes place in a steam cracker.
The ethane gas, or mixtures of gas containing ethane, is mixed with steam and heated to temperatures of 900°C and over.

Long-chain hydrocarbons are broken down into shorter ones at high temperatures, and saturated hydrocarbons such as ethane are converted into unsaturated ones.
If pure ethane is fed into the steam cracker, the ethene yield is particularly high.

On the other hand, mixtures of long-chain hydrocarbons also produce a large number of other compounds with a significantly lower ethene content.

Most of the ethene obtained is used to produce the widely used plastic, polyethylene.
Other intermediate products obtained from ethene are ethylene oxide, ethylene dichloride, and ethylbenzene.

In coolant technology, ethane can also be used as a coolant in refrigerators and air-conditioning systems.
Commercially negligible quantities of the liquid gas are used in science to prepare water-rich samples for electron microscopy.

Very cold liquid ethane allows them to freeze to -150°C so quickly that the water cannot crystallize, thus preserving biological cell structures that would otherwise be destroyed by ice crystals.

The most efficient process for obtaining pure ethane from natural gas is the liquefaction of the gas.