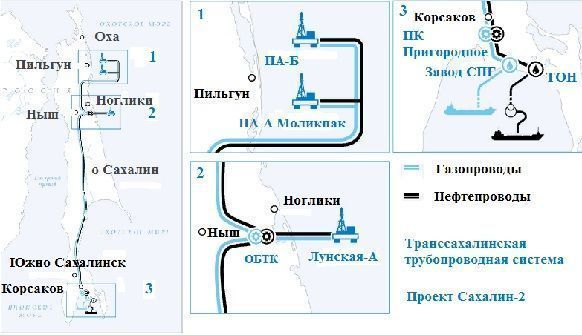 The history of the Lunskoye field saw 3 stages of its exploration. It was during the 3rd one that LUN-1, the 1st exploratory well, was drilled in the Lunskoye anticline fold in 1984. As a result of this survey, a large oil, gas and condensate field was discovered offshore at a sea depth of about 50 m, 12 km to the North-East of Sakhalin. Following further exploration, the field was classified as unique.

To develop its impressive reserves, high-capacity gas wells were drilled: one such well can produce enough hydrocarbons to operate a 2 GW gas power plant. The 1st exploratory well LUN-1 was drilled using the Okha jack-up rig.

The results of that 1st well’s drilling made it possible to detect gas and gas condensate, and served as substantial grounds for continuing geological exploration of the entire field to confirm the volume of hydrocarbon reserves, as well constructing producing wells and starting hydrocarbon extraction. A total of 8 wells were drilled for prospecting.

The offshore facility consists of the Lun-A platform is the 1st in Russia offshore oil production platform. This platform produces the majority of the gas for the LNG plant. The Lun-A was successfully brought on stream in December 2008 and introduced to the onshore pipeline system.

Today, the Lunskoye field is being actively developed. It houses the Sakhalin-2 project’s largest well (8.3 km) with a significant horizontal displacement. During the construction of this well, Sakhalin Energy used state-of-the-art technologies and set several company records with regards to the remoteness of operations: floating casing, lowering of geophysical equipment by a well tractor, installing screens with gravel packs.


In September 2019, the company completed the construction of a new, even longer well.