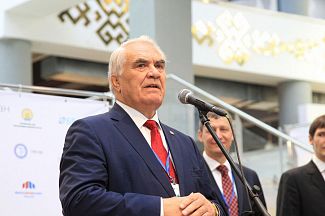 President of the Union of Oil and Gas Industrialists of Russia

One of the founders of the oil and gas complex in Western Siberia. Associate B. E. Scherbyna.

He graduated from the Ural Polytechnic Institute.

From 1959 to 1961, he worked at the Berezniki Titanium-Magnesium Combine as an engineer-technologist at a concentrate smelting shop under construction. There he switched to Komsomol work; was the 2nd, and then the 1st secretary of the Berezniki city committee of the Komsomol.

In 1964–1966 he worked at the Central Headquarters of the “Komsomolsky searchlight” under the Central Committee of the Komsomol.

In 1966, on the initiative of B. N. Pastukhov, he moved to Tyumen, where he was elected 1st secretary of the Komsomol regional committee. Under GI Shmal, the development of oil and gas fields in Western Siberia received the status of the All-Union Komsomol construction strike.

Since 1971 - 1st Secretary of the Tobolsk Party Committee.

In 1973, the 1st secretary of the Tyumen Regional Party Committee B. Ye. Shcherbina moved to Moscow for a raise, with the result that his place was taken by the 2nd Secretary of the Regional Committee G. P. Bogomyakov, and G. I. Shmal was transferred from Tobolsk to the place 2 -th secretary of the regional committee.

In 1978, due to disagreements with G. P. Bogomyakov, he switched to economic work. He first became the general director of the Sibkomplektmontazh association, which was part of the structure of the ministry of construction of oil and gas enterprises of the USSR, headed by B. Ye. Shcherbina, and former party head G. I. Shmal.

A further career took shape in this particular ministry. In 1982, G. I. Schmal became deputy, and in 1984, first deputy minister. After the transformation of the ministry of construction of oil and gas enterprises of the USSR into the state concern Neftegazstroy, he was appointed chairman of his board, then became chairman of the board (1990) and chairman of the board of directors (1998) of RAO Rosneftegazstroy.He was directly involved in the development of the Urengoi and Yamburg gas and condensate fields, the construction of the Urengoy-Pomary-Uzhgorod gas pipelines, the Urengoy-Center, the Yamburg-Tula condensate, the Urengoy-Surgut condensate pipeline, the Surgut condensate stabilization plants and motor fuels, compressor stations in all gas pipelines and Sakhut-Siberian gas pipelines. country.
He participated in the work of the government commission on the elimination of the consequences of the accident at the Chernobyl nuclear power plant.

He was deco0rated with the Order of Courage, the October Revolution, the Red Banner of Labor, Friendship of Peoples, and medals.
Honored Worker of the USSR Ministry of Oil and Gas Development, Honored Worker of the Gas Industry. Laureate of the Prize of the Government of the Russian Federation in the field of technology for 1997. Candidate of Economic Sciences.