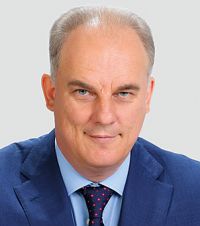 A. Petrov has 30 years experience in the industry: he began to work at the Khmelnitsky NPP of Ministry of Atomic Energy of the USSR in 1985 as a driver crawler of 5th discharge at turbine shop.

From 1999 to 2001 - Deputy Chief Engineer for Operation at the Volgodonsk NPP.

In 2001 he was appointed Chief Engineer at the Volgodonsk NPP.

On September 7, 2015 he was appointed General Director of the Rosenergoatom.