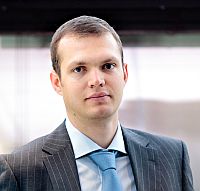 Alexey Golovin graduated from the Law Faculty Adilet and holds the Master's degree in Business Administration from the Executive MBA Essec & Mannheim program.

Golovin joined KazMunayGas group of companies in 2008. He has been with KMG International since 2009.

He has been Vice President for Corporate Development and Strategy at KMG International N.V. since November 2016.