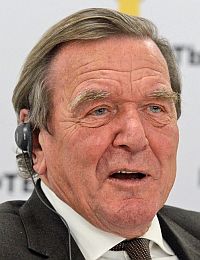 Graduated from the University of Goettingen in 1976, the Faculty of Law, with a degree in Law.

Fellow of the Russian Academy of Sciences.

His chancellorship was marked by extensive social and regulatory reforms, as well as a growing awareness of Germany’s global responsibility.

He was elected to the Rosneft Board of Directors by decision of the Extraordinary General Shareholders Meeting of Rosneft Oil Company on 29 September 2017.

Schroeder has been married 4 times.

He rents an apartment in Berlin while retaining his primary residence in Hannover.