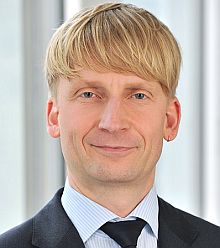 He holds economics studies in St. Petersburg and Stuttgart.

Murin qualified as Master of Sciences in Financial Economics for Emerging Markets at the University of London.

After joining Wintershall as part of its trainee program and working in Kassel, the financial economist took over various positions as finance manager – 1st in Argentina, later at Wintershall Russia, and also as Deputy Finance Director for the Yuzhno Russkoye and Achimgaz projects in Russia.