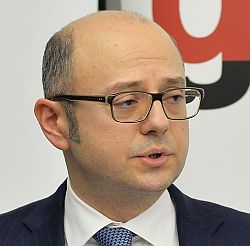 Parviz Ogtay Shahbazov was born on November 24, 1969 in Baku.

Shahbazov studied in State Oil Academy of Azerbaijan in 1986-1992.

Since 1991 he has been involved in diplomatic service.

He served as the 2nd secretary at the International Economic Relations department in the Foreign Ministry of Azerbaijan in 1991-1992, worked at Azerbaijan’s Embassy in Germany in 1992-1996.

In 2005, he was appointed as chairman of OSCE Forum for Security Co-operation.

He is married, has 2 children and knows English, German and Russian.