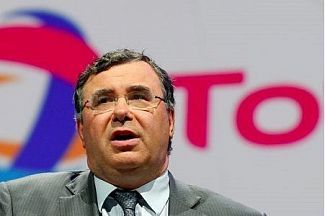 Chairman and CEO of TOTAL S.A.

Born on June 24, 1963 (French).   A graduate of École Polytechnique and a Chief Engineer of France’s Corps des Mines, Mr. Pouyanné held, between 1989 and 1996, various administrative positions in the Ministry of Industry and other cabinet positions (technical advisor to the Prime Minister – Édouard Balladur – in the fields of the Environment and Industry from 1993 to 1995, Chief of staff for the Minister for Information and Aerospace Technologies – François Fillon – from 1995 to 1996).
In January 1997, he joined Total’s Exploration & Production division, first as Chief Administrative Officer in Angola, before becoming Group representative in Qatar and President of the Exploration and Production subsidiary in that country in 1999.
In August 2002, he was appointed President, Finance, Economy and IT for Exploration & Production.
In January 2006, he became Senior Vice President, Strategy, Business Development and R&D in Exploration & Production and was appointed a member of the Group’s Management Committee in May 2006.
In March 2011, Mr. Pouyanné was appointed Deputy General Manager, Chemicals, and Deputy General Manager, Petrochemicals.
In January 2012, he became President, Refining & Chemicals and a member of the Group’s Executive Committee.
On October 22, 2014, he was appointed Chief Executive Officer of Total.
On May 29, 2015, he was appointed by the Annual Shareholders’ Meeting as director of Total S.A. for a 3-year term.
At its meeting on December 16, 2015, the Board of Directors of Total appointed him as Chairman of the Board of Directors as of December 19, 2015 for the remainder of his term of office as director. Mr. Pouyanné is therefore now Chairman and Chief Executive Officer.

Mr Pouyanné is married and has 4 children.
Advertising at Neftegaz.RU