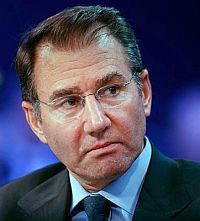 Glasenberg was born in January 1957 in South Africa to a Jewish family.

Graduated from the University of the Witwatersrand (Bachelor's Degree in Accounting) and University of Southern California (Master of Business Administration).

He joined Glencore in 1984, working in the coal department in South Africa and Australia.

He managed Glencore's Hong Kong and Beijing offices from 1989 to 1990, and became head of the company's coal department in 1991.

From 2002 till now – Chief Executive Officer of Glencore

Member of the Board of Directors of Rosneft since 2017.

Ivan Glasenberg does not hold any shares of Rosneft.

Glasenberg has been a champion race-walker for both South Africa and Israel, runs and swims daily to maintain his fitness.

He is married with 2 children.

In 2017 the Financial Review Rich List assessed Glasenberg's net worth at $6.85 billion.