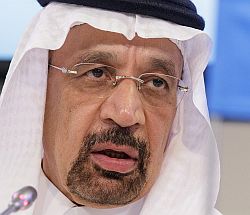 Al-Falih was born in 1960 in Riyadh, Saudi Arabia.

He attended Texas A&M University, earning a bachelor's degree in mechanical engineering in 1982, and later pursued an MBA at the King Fahd University of Petroleum and Minerals, which he completed in 1991.

Al-Falih joined Saudi Aramco in 1979. For over several years, he held positions of increasing responsibility and in 1992, he supervised several technical units, mainly the Mechanical and Civil Systems Division.

In July 1999, Al-Falih became president of Petron Corporation, a joint venture between Saudi Aramco and the Philippine National Oil Company.

He returned to the Kingdom in September 2000 to serve as vice chairman on the Saudi Aramco Study Team for Upstream Gas Ventures, until his appointment as vice president of Gas Ventures Development and Coordination in May 2001.

In October 2004, Al-Falih was appointed to the Board of Directors of Saudi Aramco.

In November 2008 he was appointed as the new president and CEO of the company.

In May 2016, Al-Falih was appointed Minister of Energy, Industry and Mineral Resources of Saudi Arabia.

He is married and has 3 daughters and 2 sons.