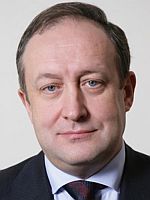 In 1983 graduated from the Far East Nautical Engineering College (Vladivostok, Russia) named after admiral G.Nevelskoi where he majored in “maritime navigation”.

In 1995 graduated from the Far East State University, Faculty of Law (Vladivostok, Russia). In 2007 qualified for the doctorate degree in Technical Sciences.

1995-1996 – Ministry of Transport of the Russian Federation - Deputy Director of the Maritime Transport Department (Maritime Administration of Russia).

1996-1998 – Deputy, the First Deputy of the Minister of Transport of the Russian Federation.

Since October 2004 – President and CEO of PAO Sovcomflot, Chairman of the Executive Board.