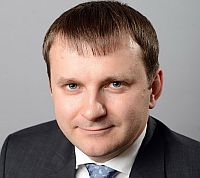 Graduated from the High School of Economics in 2004.

Oreshkin worked in the Ministry of Finance from 2013 and was appointed as the Deputy Finance Minister in March 2015.

The Minister for Economic Development since November 30, 2016.

The appointment comes about 2 weeks after the previous Russian Economy Minister, Alexey Ulyukayev, was detained by Federal Security Service on suspicion of accepting a $2 million bribe in exchange for positively assessing a major privatization scheme.

Maxim Oreshkin is married and has 1 daughter.