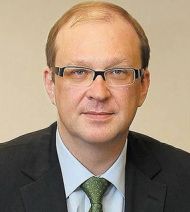 In 1995 Maksim Sergeyevich graduated from Christian-Albrechts-University of Kiel, Germany with a degree in Political Economy.

From 2006 to 2010 he worked as the Senior Vice-President for Economics and Finance of the Sukhoi Civil Aircraft, CJSC.

Previously, he worked in different positions in the field of financial and economic activities.

Since 2010 he served as the Corporate Finance Director of the Sukhoi Aviation Holding Company, JSC.

In 2011 was appointed as the Vice-President of Transneft.

In 2012 he was appointed as the First Vice-President of Transneft.

He was awarded the Order of Merit for the Motherland of the II degree.