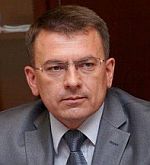 In 2001 he graduated from the Ufa State Petroleum Technological University with a specialization in Design, Construction and Operation of Gas and Oil Pipelines.

During the period from 2010 to June 2012 he hold the position of the Deputy Vice-President of Transneft.

In June 2012 he was appointed the Vice-President of Transneft.

He was given the title of Honorary Oiler.