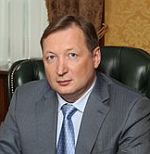 In 1991 he graduated from Kuybyshev Polytechnic Institute and in 2006, he took an Executive MBA degree at the Stockholm School of Economics.

1991 - He started his career in Nizhnevartovskneft, worked his way up from production operator to Deputy General Director - Head of the enlarge oilfield.

Since 2005 - First Vice President of OC Rosneft JSC, in charge of the industrial sector of the company.

2009-2012 - Deputy Minister of Energy of the Russian Federation. He was in charge of issues connected with Russian oil & gas complex activity.

Sergey Kudryashov is also a Head of the Working Group of the Commission under the President of the Russian Federation for the issues of the Fuel and Energy Complex (FEC) and ecological safety development strategy.