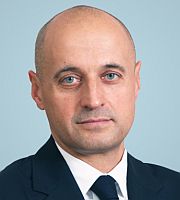 In 1991 he graduated from the Lesgaft Leningrad State Institute of Physical Culture.

In 1997 he graduated from the Lobachevsky Nizhny Novgorod State University, majoring in Economics and Management at the Industrial Enterprise.

From 2007 to 2014 – Director of the Oil and Oil Products Export Department, the assistant to the President of Rosneft Oil Company.

In October 2014 he was appointed Vice President of Transneft.