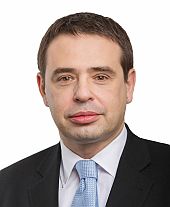 He graduated from the Faculty of Computational Mathematics and Cybernetics at Lomonosov Moscow State University, and the Kuybyshev Military Engineering Academy.

He received an MBA at the International Institute for Management Development in Lausanne (Switzerland).

From 1994 to 1997, he served as chief financial officer of AO Karelsky Okatysh

From 1996, he was appointed to the post of general director.

In 1999-2007, he held the positions of strategy and business development director for countries of the CIS, and then executive director of departments in Ukraine and Russia, and French holding company Lafarge, a world leader in building materials.

From 2012 to 2014, he served as General Director of РJSC ArcelorMittal Kryvyi Rih, and was also a member of the group management committee and vice-president of ArcelorMittal group.

Since February 3, 2015, Artem Polyakov hold the position of the General Director in NefteTransService Group.