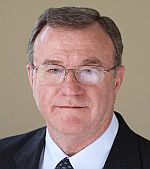 Mr. Francis has been Chief Executive Officer and an Executive Director of the PetroNeft since its formation in 2005.

He has over 40 years experience in the petroleum industry and was with Marathon for 30 years.

He started work with Marathon as a geologist/geophysicist and held various international positions.

Marathon and its partners ultimately won the first Russian competitive tender which was to develop the Sakhalin II Project offshore Sakhalin Island.

He represented Marathon as shareholder and was a director on the board of Sakhalin Energy Investment Company during the Phase I Project Development.

In 2015, on the occasion of the 10th Anniversary of LLC Stimul-T/PetroNeft Resources, Mr. Francis received a Certificate of Honour from Tomsknedra (the Regional Federal Agency of the Ministry of Natural Resources of the Russian Federation) for significant contributions to the development of oil fields on the right bank of the River Ob.

He is a member of the American Association of Petroleum Geologists and Society of Exploration Geophysicists.

Mr. Fransis has also completed the Program for Management Development at Harvard University.