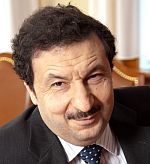 Graduated from Plekhanov Moscow Institute of the National Economy in 1981.

Since 1991 he participated in the development and implementation of economic reforms in Russia, including working as Advisor to the Chairman of the Russian Government from 1992-1993.

In 1997 - 2002 Vladimir Mau was the Head of the Working Center for Economic Reforms of the Russian Government.

Since 2002  - Rector of the Academy of National Economy under the Russian Federation Government.

In 2010 Vladimir Mau became the Rector of the newly formed Russian Presidential Academy of National Economy and Public Administration (RANEPA).

Since 2011 – Member of the Gazprom Board of Directors.

Mau is the author of 25 monographs, books and textbooks published in Russia and the UK, as well as more than 600 other published works in Russian, English, French, German and Italian.
Doctor of Economics
Doctor of Philosophy (PhD) at Pierre Mendes France University specializing in Applied Economics
Honored Economist of the Russian Federation
State Councilor of the Russian Federation of the First Order