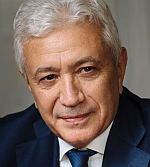 Graduated from Groznyy Oil Institute in 1976 with a degree in chemical technology for oil and gas refining.

1976-1993 - worked at the Sheripov Groznyy Refinery, where he rose through the ranks from machine operator to become refinery director.

In 1996, joined SlavNeft’ as Head of the Oil and Oil Products Trading Department and was later appointed the company’s vice president.

He joined SibNeft’ (from June 2006 - Gazprom Neft’) as Vice-President for refining and marketing in April 2006.

01.2008 – till present, Deputy CEO for Logistics, Processing and Sales and Deputy Chairman of the Management Board, Gazprom Neft PJSC.