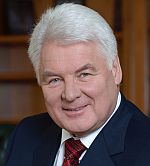 Valery Golubev graduated from Ulyanov (Lenin) Leningrad Electrotechnical Institute, and the Academy of National Economy under the Russian Federation Government.

He has a PhD in Economics.

1991–2002 Head of Secretariat, Head of the Vasileostrovsky District Administration; Chairman of the Tourism Committee at the St. Petersburg Mayor’s Office.

2002–2003 Representative of the Leningrad Oblast Legislative Assembly in the Federation Council of the Federal Assembly of the Russian Federation.

2003–2005 Member of the Management Committee of Gazprom, Director General of Gazkomplektimpex.

2005–2006 Member of the Management Committee, Head of the Investment and Construction Department of Gazprom; Director General of Gazkomplektimpex.

Since 2006 Deputy Chairman of the Management Committee of Gazprom.

On February 25, 2019, Valery Golubev has been relieved of his post as Deputy Chairman of the Management Committee.

He is married and has two children.