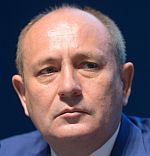 Graduated from Kuibyshev Aviation Institute, majoring in Operation of Aircraft and Airborne Engines.

2000–2003  Deputy Director General for Gas Transportation and Utilization at Tomskgazprom.