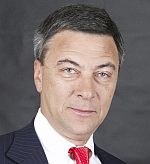 Andrey Akimov was born in 1953 in Leningrad.

He graduated from Moscow Finance Academy, Faculty of International Economics.

1991 – 2002 Managing Director of financial company IMAG GmbH in Vienna (Austria), Staff Advisor to Chairman of the Vneshtorgbank Management Board.

Since 2002 Chairman of the Gazprombank Management Board.

Since 2006 Member of the Novatek Board of Directors.

Since 2011  Member of the Gazprom Board of Directors.