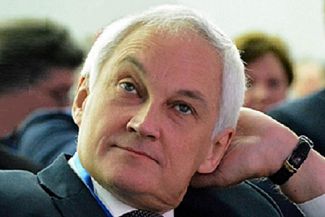 He studied economics at Moscow State University and graduated with honors in 1981.

From 1981 to 1986, Belousov was probationer-researcher and then junior researcher in the simulation laboratory of human-machine systems of the Central Economic Mathematical Institute.

From 1991 to 2006, he was head of laboratory in the Institute of Economic Forecasting in the Russian Academy of Science. He was external advisor to prime minister from 2000 to 2006.

2006–2008 — Deputy Minister of Economic Development and Trade of the Russian Federation.

From 2008 to 2012, he was director of the finances and economic department in the Russian Prime Minister's office.

On 21 May 2012, he was appointed minister of economic development to the cabinet led by prime minister Dimitri Medvedev.

Since June 24, 2013 — Aide to the President of the Russian Federation.

Married, with one son.