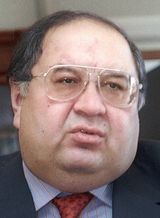 Usmanov is Russia's 18th richest man and 278th richest in the world (according to Forbes Magazine's Richlist).
Born in Uzbekistan.
1976 International law degree from Moscow State University of International Relations.
Entered business in the early eighties, becoming vice-president of a joint Uzbek-Belgian corporation.
Red and White Holdings, established to oversee hsi sports investments, is co-owned by Usmanov and London-based investor Farhad Moshiri, who is Chariman of Metalloinvest
General Director of the Russian company Gazprominvestholding, Gazprom's investment arm, Mr Usmanov has major interests in energy, metals and timber. His media assets include Russia’s main business newspaper, Kommersant, a 75% stake in one of Russia’s versions of MTV, Muz TV, as well as a 50% of the Russian sports channels, 7 TV.
In 2004 Mr Usmanov was awarded the Presidential Medal of Honour for Services to business and charity.

In August 2007 he was also reported to be behind a $4 billion telecoms deal that would consolidate ownership of Russia's no.3 operator Megafon.
Upon acquiring a 14.5% stake in Aresenal F.C. Usmanov told Kommersant ”I’m an Arsenal fan for eight years already and think the company has the best coach in Britain’s Premier League, but this purchase is not a strategic or political investment, but rather a portfolio one. Arsenal business was obviously underestimated. I intend to gradually widen the stake, as I expect its worth to go up and reach a fair level before long. The club has everything to attain it.”