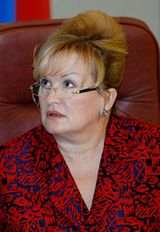 Graduated from the Saratov Institute of Law; majored in constitutional and civil law.

Sliska has been married twice. She has no children.