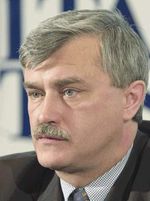 After graduation worked at Leninets Research and Production Association and at a district Komsomol committee in Leningrad.

2000-2011 - Plenipotentiary Representative of the President of the Russian Federation in the Central Federal District.