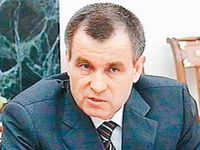 Army General, with a PhD in Economics,
Born in 1956
1974 - Entered Kuusinen State University in Petrozavodsk, Karelia and graduated in 1979.

1981, he joined the KGB criminal investigative officer at Kalevala and Kostomuksha Municipal Depts was then Head of Medvezhyegorsk Regional Dept. and then Chief of Anti-Terrorism in the Republic of Karelia.

1995, Central Office of Federal Counterespionage Service (FSK), and later in the FSB, as Chief Inspector of Organizational-Inspectorial Office, and as Chief of Internal-Security
1998, Chief of the Main Control Office of the President of Russia.
1999, Head Office for Drug Trafficking Control in the Dept of Economic Security. Deputy Director of the FSB.

Rashid Nurgaliyev is married and has 2 children. His favorite city is Petrozavodsk.