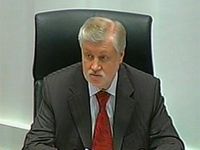 Mironov holds 5 post-graduate degrees, including an education in geophysics, engineering, and law.

He was a candidate in the 2004 presidential election. Mironov polled less than 1% of the vote.

In October 2006, he became the leader of the new opposition party "Fair Russia"

From 2001 to 2011 Sergey Mironov was Chairman of the Federation Council, the upper house of the Russian parliament.

He has been married three times, and has two sons and a daughter.