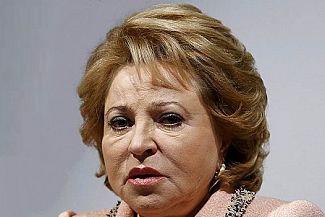 Chairman of the Federation Council RF

Was born on 7 April 1949 in the city of Shepetovka, Ukraine.

Retrained at the Diplomatic Academy of the USSR Ministry of Foreign Affairs, 1991.

1986 was Vice Chair of the Executive Committee of the Leningrad City Council.

1991-94-Ambassador of the Soviet Union/Russia to the Republic of Malta.

1995-97-Head of the Foreign Ministry's Department for Liaison with Regions, Parliament, Non-Governmental and Political Organizations.

1997-98-Ambassador of the Russian Federation in Greece.

1998-2003-Deputy Prime Minister of the Russian Federation for Social Policy.

On 21 September 2011 was unanimously elected Chairperson of the Council of the Federation of the Federal Assembly of the Russian Federation and in 2014 she was re-elected to this high position.

Matviyenko was considered, until recent years, to be the highest-ranking female politician in Russia.

She is married, has a son and a granddaughter.