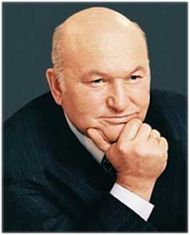 Married second time. Luzhkov's wife, Yelena Baturina, is the only woman on Forbes's list of Russia's richest people and controls Inteka Holding, an equity fund with a capitalization of 82.9 billion rubles ($3.15 billion).
They have four children.
Luzhkov is an ubiquitous, if not often controversial, figure on Moscow's political and social scene, and maintains an active and sporting lifestyle. Hobbies: football, tennis, beekeeping