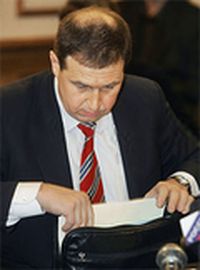 1990- 1992 - senior researcher, then deputy director of the department to study St. Petersburg’s regional economic problems at the Financial-Economic Institute
1992- 1993 - deputy head of the Work Center for Economic Problems of the Government of the Russian Federation

April 26, 1993 - appointed head of the Group of Analysis and Planning of the Prime Minister of the Russian Federation.
Illarionov - together with Sergei Vasilyev - took part in drafting the Russian Government program passed in the summer of 1993

Feb. 7, 1994 - Illarionov applied for early retirement, accusing Prime Minister Viktor Chernomyrdin of "economic backsliding."
Feb. 9, 1994 - dismissed for “breach of working discipline" (Illarionov stayed away from work for three days and without the knowledge of Chernomyrdin gave lectures in Birmingham, United Kingdom from January 17 to January 20, 1994)

July 10, 1998 - joined the Governmental Commission on Economic Reform.
April 2000 - appointed adviser to the President of the Russian Federation on economic matters

In October 2006, Illarionov was appointed senior researcher of the Center for Global Liberty and Prosperity of the US libertarian think tank Cato Institute in Washington