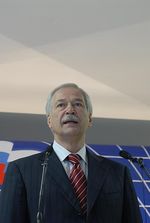 Boris Vyacheslavovich Gryzlov (Борис Вячеславович Грызлов) is the current speaker of the State Duma, Russia's lower house of parliament. He is also the head of the United Russia party and the leader of its faction in the Duma. He entered into politics late in life, in 1998. He is seen as a loyal follower of President Vladimir Putin, who headed the United Russia ticket in 2007 Duma elections.
Gryzlov was born on Dec. 15, 1950 in Vladivostok, Primorsky territory. His father was a military pilot, and his mother was a teacher. The family moved to Leningrad four years after Gryzlov's birth and he was raised there. In 1968, he entered school at Leningrad Electro-Technicial Institute and focused on radio engineering. He was an active member of the Komsomol youth organization. He graduated from the institute in 1973 and remained in St. Petersburg, working for a local trade union. He made political contacts in the local administration.
Gryzlov entered politics late in life, at first as a candidate and campaign operative in St. Petersburg. He ran unsuccessfuly for the St. Petersburg Legislative Assembly in 1998. In August 1999, he headed the campaign headquarters for Viktor Zubkov, a candidate for governor of Leningrad Region.
During 1999 elections to the State Duma, Gryzlov ran the Petersburg campaign operation for the Unity party, later known as United Russia. He also headed the party list in the region. The party gained 17 percent of the vote, enough of a mandate to propel Gryzlov into the Duma. Dmitry Kozak, a newly prominent player in Kremlin politics, recommended Gryzlov for the head of the Unity party's faction in the legislature, the role would make him a prominent player in national politics for the next eight years. At the time, the Unity part was the second-largest faction in the parliament.
In May 2001, Gryzlov received his doctoral degree in political science with his thesis, "Political parties and the Russian Transformation: Political theory and practice. From March 2001 to December 2003, Gryzlov served as Russia's interior minister, abandoning party politics temporarily.
It was suggested that Gryzlov's loyalty to President Vladimir Putin made him an attractive candidate as the party's top official. When the Unity party was rebranded and reformed in 2002, Gryzlov was appointed as the official head of United Russia. He was seen as someone who could bring a firm hand and calm several factions battling for power within the party.
In December 2003, after parliamentary elections made United Russia the largest bloc in the State Duma, Gryzlov was elected Duma speaker. He retained that position in 2007 Duma elections when United Russia further increased its dominance in the legislature.
He is married with two children.