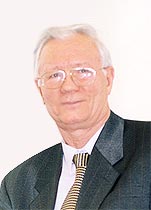 He was born on October, 31, 1934 in Kazan.
In 1957 v graduated from Kazan State University, profession v geology and survey of oil and gas deposits.
Began his working activity in 1957 as an assistant driller at "Chapaevskneft" Co (Samara region)
In 1957-1960 v worked as a geologist, chief geologist, head of the geological department of "Bugulmaneft" (subsidiary of "Tatneft" in Leninogorsk).
In 1966-1997 v chief geologist, deputy general director of JSC "Tatneft", Almetievsk City.
Since 1997 up to now v professor of oil and gas geology department of Kazan State University.
In 1998 v was appointed State Adviser of the President of Tatarstan on bowels usage, oil and gas issues.
Doctor of mineralogical sciences, member of the Academy of mining sciences and of the Russian Academy of Natural Sciences, member of Tatarstan Academy of sciences.
Honoured geologist of Russia and Tatarstan. Honoured oilman.