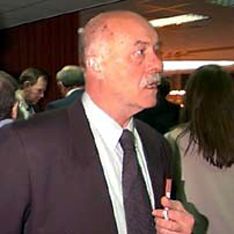 
From December, 1993 to December, 2003 v deputy of the State Duma of the 1st-3rd sessions.
In May, 1999  voted for impitchment of the Russian President Boris Yeltsin.
In January, 2000 v expressed his wish to stand for the President elections, garnered 0.44% of the vote.

Since 2005 - Member of Russian political party United Russia.
In June 2005, he, among 50 public figures, signed a letter in support of the conviction of former Yukos heads Mikhail Khodorkovsky.

In March 2014 he signed a letter in support of the position of the President of Russia Vladimir Putin on Russian accession of Crimea.


Was married twice.
The present wife v Galina Borissovna Govorukhina, producer.
Son by the first marriage v Sergey Stanislavovich Govorukhin, was a famous war correspondent, writer and director of documentary films.
In 2011 he survived a stroke and died several days later at the age of 50.