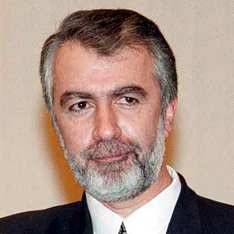 Date of birth: February, 28, 1952.
In 1975-1977 v junior scientific employee of the Research Institute of Earth physics.
In 1977-1990 v scientific employee of the Institute of bowels processing problems.
In 1989 v took part in the electorate campaign of the Academician Andrey Sakharov.
He is one of the creators of the movement "Democratic Russia" and "Democratic Reforms movement".
In 1990-1991 v general director of the department of Moscow mayor, assistant of Gavriil Popov, Chairman of the Moscow Soviet of People-s Deputies.
From September, 1991 to December, 1994 v head of State Security committee administration in Moscow and the Moscow region.
In 1995-1996 v Chairman of Russian Party of social democracy (Moscow); Soviet member, secretary of the general council of the movement "Trade Unions of Russia v welcome to elections" (from 1996 v "Labor Union"); advisor of Mikhail Shmakov, Chairman of the Federation of independent trade unions of Russia.
In summer, 1996 worked for a short time in the "Group Most".
From August, 1996 to December,1998 v deputy head of RF President administration, head of the personnel department.