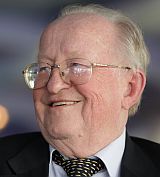 Viktor Gerashchenko was born in Leningrad on 21 December 1937.

In 1960 he graduated from Moscow Financial Institute.
Professor, Doctor of Economic Sciences.

Since 1996  Chairman of the board of the International Moscow Bank.
On September, 11, 1998 after retirement of Sergei Dubinin RF President Boris Yeltsin offered the State Duma to appoint Victor Gerashchenko head of the Central Bank.

In 2002 Gerashchenko resigned again, citing his advanced age, and accepted the post of Chairman of the Board in the notorious oil company Yukos.
He then joined the Rodina party as a co-chairman and made it to the State Duma as their representative.

He considered becoming an opposition candidate in the 2008 Russian Presidential election.

Married, has one daughter and a son.