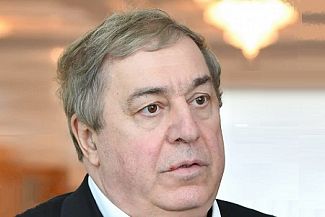 President of the RussNeft oil company

In 1975 started his labor activity as loader (warehouse worker) in the city Grozny.

1982 – Process Engineer, later- senior process engineer of Grozny Production Association at the Ministry of Local Industry of the RSFSR, Grozny.

1983 – Head of Technological Department, later -  Head of Production Department of the enterprise.

At the end of the 80-ths he founded one of the first cooperative banks in this country.

In 1992  he founded and headed industrial and financial company “BIN” in Moscow (Bank of Investments and Innovations). Since 1994 - President of the Joint Stock Commercial Bank”Bin”.

In 1995 Mikhail Gutseriev gave up business activity and turned to politics.

In February 2000 at the meeting of shareholders of State Russian-Belorussian Oil and Gas Company Slavneft Mr. Gutseriev was elected President of the Company.


Mikhail Safarbekovich is a master of sports in decathlon.
He plays the violin and the piano, writes verses, likes to paint.