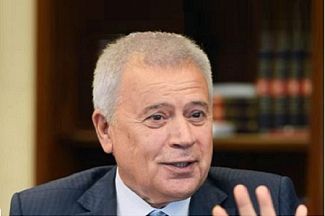 Former President and CEO of LUKOIL

In the depths of Western Siberia, there are still huge recoverable reserves of oil - almost 18 billion tons

Doctor of Economics. In 1974 graduated from Azerbaidzhan Institute of Oil and Chemistry.

Employed since 1968, worked at oil fields in Azerbaijan and Western Siberia.

From 1979 on worked in Kogalymneftegaz (Siberia) at first as an engineer, then as general director of the association.

In 1990, Alekperov was appointed deputy minister of the Oil and Gas Industry of the Soviet Union and became the youngest deputy energy minister in Soviet history.

1992-1993: President of the Oil Concern Langepasuraikogalymneft.

Employing more than 100 000 people, today LUKOIL is among the world's most powerful oil companies.

He is married and has a son.