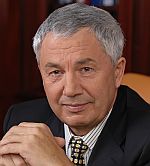 Farit Gazizullin was born on September 20, 1946 in the town of Zelenodolsk, Tatar ASSR.

He graduated from Gorky Institute of Water Transport Engineering majoring in Mechanical Engineering.
Farit Gazizullin holds a PhD in Philosophy, he is Doctor of Social Sciences, Professor.

Since 1967 Farit Gazizullin was involved in the activities of the Komsomol, Communist Party and Soviet Government bodies.

1987–1989 Head of the Economic and Social Development Department of the Tatar ASSR Council of Ministers.

Since 1998 – Member of the Gazprom Board of Directors.