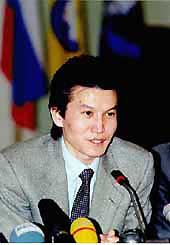 Having served in the Soviet Army, Kirsan Ilumzhinov entered the Moscow State Institute of the International Relations, the department of Japanesetics.
Upon graduation he won the contest and became the managing director of the Soviet-Japanese Firm "Liko-Raduga".

In 1989 he founded the "SAN" corporation.
In 1991 he was elected the Deputy of the USSR Supreme Soviet from the Kalmikia Republic.
In 1992 he became the prize-winner of the Golden Peace medal for humane activities.
By 1993 K.Ilumzhinov was the head of more than 50 companies, banks and exchanges in the USSR and outside its boarders.
In 1993 he was elected President of the Russian Chamber of Entrepreneurs.
In December 1993 he was elected Member of the Soviet of Federation.

Since November 1995, Ilyumzhinov has been President of the World Chess Federation, investing a large amount of his private fortune into the game.

In October 1995 he was elected President of the Kalmikia Republic for the second term till 2003.

In 2010 Ilyumzhinov said he did not intend to stay on as head of Kalmykia after his fourth term.
24 October of the same year as the head Ilyumzhinov of Kalmykia Alexei Orlov officially changed.

In April 2012, he was awarded the title Hero of Kalmykia

Ilumzhinov is married, he has one son.
Kirsan Ilyumzhinov - master of sport of chess.
Speaks Kalmyk and Russian languages, Japanese, English, a bit Korean, Mongolian and Chinese.
Calls himself a Buddhist