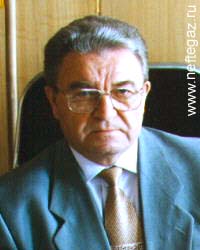 In 1952 entered the Molotov River College with the qualification "marine mechanic". But in September 1956, after the graduation of the college he began working in the mine N2 of "Kizelugol", where he worked as an underground locksmith and a mining craftsman. From December 1958 till May 1969 he worked in the mine N38 of "Kizelugol" as a mining craftsman, an assistant of the area head, a chief engineer assistant, chief engineer deputy and, finally, mining committee chairman of the union. At the same time he studied in the Kizel Mining Technical College from 1962 till 1964.

In May, 1969 he transferred to the Kizel City CPSU Committee to the position of the head of the industry-transportation department. Since May 1971 he became Chairman of the Kizel City Executive Committee. In 1973 after 5 years of studies he graduated from the Moscow University of Professional Movement with distinction and got the qualification of the labor economist. In December 1983 he was appointed Head of the Organization-instruction Department in the Perm Regional Executive Committee, and from April 1990 till January 1992 he worked as Head of the Soviet Activity Department in the Perm Regional Soviet of the People`s Deputies.

The contribution of G.V.Igumnov into the development of the economic and social sphere of Russia was noted by several high awards, including two orders of the Honor Sign , Order for the deeds to the Motherland of the third degree, Order of Daniil Moskovski of the second degree, medals and other awards.

In his free time he devotes much time to the reading of literature on Economics. He is fond of music, theater. He is a good tennis player and car driver.