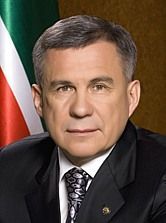 President of the Republic of Tatarstan

Rustam Minnikhanov was born on March 1, 1957 in the Novyi Arysh village of the Rybno-Slobodsky District in the Tatar ASSR.

Education:
He graduated from Kazan Agricultural Institute in 1978 as mechanical engineer and from Correspondence Institute of Soviet Trade (Moscow) as a commodity expert in 1986.
He is a doctor of economic sciences.