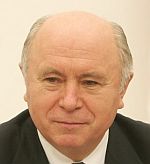 He began his career in 1968 as a combine operator in one of the collective farms of the Insarsk district. In 1968 he entered the Mordovia Ogaryev State University and in 1973 got the qualification "engineer of the electronic equipment".

On May 10, 2012 Merkushkin resigned to become Acting Governor of Samara Oblast.

His hobbies are billiards, chess, football, volleyball. He is fond of Russian folk songs.